Biblical Proof that Jesus is a Muslim

IF JESUS IS GOD…

IF JESUS IS GOD…

If Jesus was GOD, then why in John 5:30Jesus told his followers that he can’t do a single thing of his own initiative?

If Jesus was GOD, then why in John 5:36-38 Jesus said that GOD had assigned him (Jesus) work and GOD is a witness on Jesus?

If Jesus was GOD, then why in John 5:32 Jesus told his followers that they have never seen GOD at anytime nor ever heard his voice?

If Jesus was GOD, then why in Matthew 26:39 Jesus fell on his face and prayed to his GOD? END_OF_DOCUMENT_TOKEN_TO_BE_REPLACED

Why Did the Religious Leaders Want to Kill Jesus?

The New Testament records that the religious leaders hated Jesus to the point that they arrested Him, tried Him, and brought Him to Pilate for a sentence of death. What made them so angry at Jesus that they wanted to see Him dead?

There Are Many Reasons They Wanted Jesus Dead

There were a number of things about Jesus that infuriated the religious leaders. These included.

END_OF_DOCUMENT_TOKEN_TO_BE_REPLACED

KILL, EXECUTE, SLAUGHTER, SLAY IN FRONT OF ME

New International Version
But those enemies of mine who did not want me to be king over them–bring them here and KILL THEM IN FRONT OF ME.'”

New Living Translation
And as for these enemies of mine who didn’t want me to be their king–bring them in and EXECUTE THEM RIGHT HERE IN FRONT OF ME.'”

English Standard Version
But as for these enemies of mine, who did not want me to reign over them, bring them here and SLAUGHTER THEM BEFORE ME.’”

Berean Study Bible
And these enemies of mine who were unwilling for me to rule over them, bring them here and SLAY THEM IN FRONT OF ME.'”

I put this verse here as my reference that Jesus also REPENT.

This is for Christians claim Muhammad is SIN because he repent 70 times a day.

“‘Our Father in heaven,
hallowed be your name,
10 your kingdom come,
your will be done,
on earth as it is in heaven.
11 Give us today our daily bread.
12 AND FORGIVE US OUR DEBTS,
AS WE ALSO HAVE FORGIVEN OUR DEBTORS.

13 And lead us not into temptation,[a]
but deliver us from the evil one.[b]’

God has Not Taken Any Son – He Neither Begets, Nor is Born

Rather, He Creates what He Wills, and when He Decrees a Matter, He Only Says to it, “Be,” and it is

3:45 – 47, Qur’an
[So mention] when the angels said, “O Mary, indeed God gives you good tidings of a word from Him, whose name will be the Messiah, Jesus, the son of Mary – distinguished in this world and the Hereafter and among those brought near [to God].  He will speak to the people in the cradle and in maturity and will be of the righteous.”  She said, “My Lord, how will I have a child when no man has touched me?”  [The angel] said, “Such is God; He creates what He wills.  When He decrees a matter, He only says to it, ‘Be,’ and it is.”

6:101, Qur’an
[Thus He is] Originator of the heavens and the earth.  How could He have a son when He does not have a wife and He created all things?  And He is, of all things, Knowing.

43:15, Qur’an
But they have attributed [sons] to Him from His servants a portion.  Indeed, man is clearly ungrateful. END_OF_DOCUMENT_TOKEN_TO_BE_REPLACED 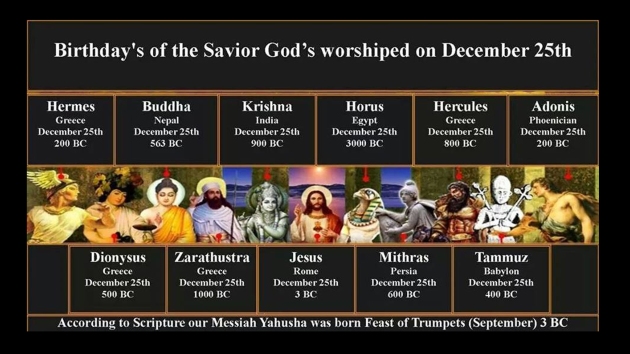 What is the Real name of the Messiah

The name of Jesus is a 400 year old name approximately, because the English language never had the letter “J” till then.

This is very important, because it says in the Bible by one name only shall you be saved. So it becomes frightfully important. Because it is a recent name not known by THE ALMIGHTY.
In fact the Original King James Bible had the name Iesus inside. This is also a historical record of the fact the name Jesus is a very modern name in terms of history.

Then on the flip side of the subject, we have the Greek god Zeus who is a representation
of The Sun god who is The Devil as known by ancient cultures.

Here below is some information on the subject, but take into account no name beginning with the letter “J” can be attributed to
THE ALMIGHTY. END_OF_DOCUMENT_TOKEN_TO_BE_REPLACED

As I stated earlier in this chapter we are going to “reverse engineer” this name “Jesus” and when we do it traces directly back to Babylon no matter how we look at it.  But what would happen if we look at the name “Jesus” as a compound English name composes (as English words are) of the Latin prefix and suffix?  The prefixes “Je” and “sus”.

We must look at it that way because the true name of the Messiah was a compound name YAH (Yahuah)(ye)SHUA (salvation) in Hebrew.  Supposedly “Jesus” comes from the name of the Messiah so if we break it into it component parts what does it say about “Jesus” in English.  Does it identify The Passover Lamb sacrifice of YHVH or an abominable sacrifice of a pig?  Does it begin to bring into focus the exact same sacrifice of The Ishtar Pig (Easter) which is the unquestioned “sacrifice” of the false religion of Christianity as well as Babylon?  Let’s look at the prefix “Je” and suffix “sus” in the English dictionary.

When considering the prefix we find that “Je” is another form of “Ge” derived from the Latin/Greek word for “earth”.  GE/JE is a short form of Gaia or Jee which is the “mother earth” or Roman goddess Tellus!  The suffix “sus” comes from the Latin word for “pig” sous.  “Sous” in Latin means pig this is where we get the pig call “soooouuuuiiii”.  So in English if we examine the name Jesus as a compound name it means literally “earthly pig” or “pig of Tellus/Goddess Mother Earth”.  It in no way implies or means Yahuah is Salvation.  Shocking… I know. END_OF_DOCUMENT_TOKEN_TO_BE_REPLACED